Why horticulture is a low hanging fruit

by Dyton Mupawaenda
in Crops, News
0 0
0 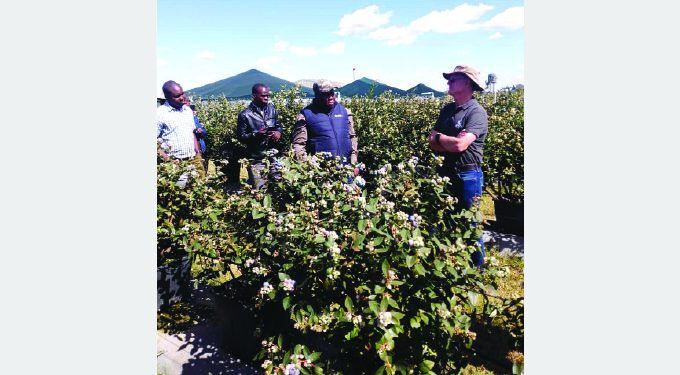 Dr Basera and Mr Henson in the blueberry field.

THE influence of sound government policies as the springboard for improved agriculture performance lays credence to assertions that horticulture is a low hanging fruit crucial for the achievement of Vision 2030 objectives.

At the inaugural horticulture investment forum in November 2021, the Reserve Bank of Zimbabwe (RBZ) governor Dr John Mangudya said: “The horticulture sector is one of the low hanging fruits with turnaround times of less than three years.

It is also labour-intensive, as it instigates activities like sorting, grading, and packaging. A horticultural revolution is pro-poor people, as it generates additional employment opportunities in rural areas where labour is abundant, which is critical for achieving widespread and equitable growth.”

He went on to say that the horticulture sector contributes about 6,5 percent to total agricultural output, about 0,7 percent of total gross domestic product (GDP) and also generates significant foreign currency for the country.

Dr Mangudya said the RBZ supported horticultural production through provision of foreign currency through the auction system for imports of key raw materials and equipment, arranging facilities — that include letters of credit (LCs) to finance essential imports such as fuel, equipment, chemicals/herbicides among others and structuring self-liquidating external finance.

Finance and Economic Development Minister Professor Mthuli Ncube said the HERF had the potential to close the funding gap and spearhead increased productivity, as well as finance bankable projects with a focus on value addition all with the hope of restoring Zimbabwe’s position as one of the leading horticultural exporting countries in the region.

Government will use part of the Special Drawing Rights (SDR) to support the agriculture productive sector for which funding support has been made a priority.

Government and monetary authorities have instituted adequate measures to stabilise the economy and put it on a sustainable growth trajectory.

The plan was developed to give impetus to horticultural growth by guiding and supporting the revival of the conventional horticulture industry as well as stimulating a transformative rural horticulture sub- sector.

“Operationalisation of the plan was premised on ensuring that the country’s annual horticulture exports, which are currently around US$70 million increase to the previous high of US$143 million per year.

“We started the project in 2020 as a greenfield investment under 10ha, we added an additional 20ha to close the year on 30ha. An additional 15ha were put in 2021, now with this 15ha currently under expansion we expect to bring the total area to 60ha.

“The success of the project hinged on incentives offered to investors such as the joint venture agreements, incremental incentives and duty-free importation of capital agriculture equipment,” said Mr Henson.

Zimbabwe’s unique selling proposition in the blueberry industry is quality, taste and production time when the country’s blueberry hits the market in winter before our arch-rival Peru floods the market with about 300 000 tonnes of its product.

To emphasise the profitability and labour intensity of blueberry, Mr Henson said: “By putting of 45ha under blueberry we are able to achieve income greater than 4 000ha of irrigated tobacco and employing about 100 times more new labour.

“The farm’s operations are benefiting from labour provided by Juru growth point residents and surrounding areas and plans are afoot to increase the hectarage to 200ha in areas where there is adequate manpower. About 75 percent of our blueberries are exported via the cheap sea route and 25 percent is air bound to maximise on earnings and take advantage of the window period when prices are high.”

The same sentiment on the move to use of sea freight in horticulture exports was also echoed by chairman of the Horticulture Development Council, Mr Stanley Heri who highlighted that the trajectory among most horticulture producers was to shift to maritime option and save on costs as air shipment is now expensive.

Rebate of duty is also granted on materials used in the preparation and packaging of fresh produce for export “Section 132 of the Customs and Excise (General) Regulations”.

The main drivers of this horticultural industry growth were the Government’s “Growth with equity programme” between 1980 and 1990 wherein in 1986, in order to stimulate production through export incentives, the Government introduced the Export Retention Scheme and the Export Revolving Fund as well as foreign exchange allocations in favour of exporters and that gave impetus for horticulture birth and growth.

An Export Processing Zone programme that included several export incentives was introduced to promote export-oriented production and development. The policy also focused on regional integration and liberalisation of trade within WTO with a view to implementing a uniform tariff structure.

As a result of the good policies, the horticulture industry in Zimbabwe grew rapidly from the 1980s through to the end of the 1990s contributing between 3,5 to 4,5 percent of the gross domestic product (GDP). At that time the sector was growing at an average annual rate of 30 percent and if this rate of growth had been maintained, it could have been a billion-dollar industry by now.

Shared vision between the Government and industry, market-driven production strategy, favourable and diverse climate, good track record of quality and service, the number of airlines servicing the industry and good infrastructure plus vast availability of land for horticulture anchored the horticulture success story.

In addition to supportive government policies, Zimbabwe’s horticultural products enjoyed a competitive cost advantage on the international market, deriving from low costs, good climate, vast availability of land suitable for horticulture, export processing zone status and (previously) the number of airlines servicing the industry. From inception horticulture growth was on an upward trend as shown below.

Between the period 1993 and 2003 the contribution of horticulture to agriculture export earnings was encouraging from around four to 23 percent annually before it sharply declined to around three percent by 2011.

On average it has remained below three percent over the period 2012-2016.

The contribution of horticulture to total export earnings drifted up between 1993 and 2003 from around two to seven percent annually, then declined gradually to one percent by 2010 and has been on average around this margin up to 2019.

Are contract arrangements fair for farmers?