When passion becomes the driving force

by Dyton Mupawaenda
in Crops, News
0 0
0 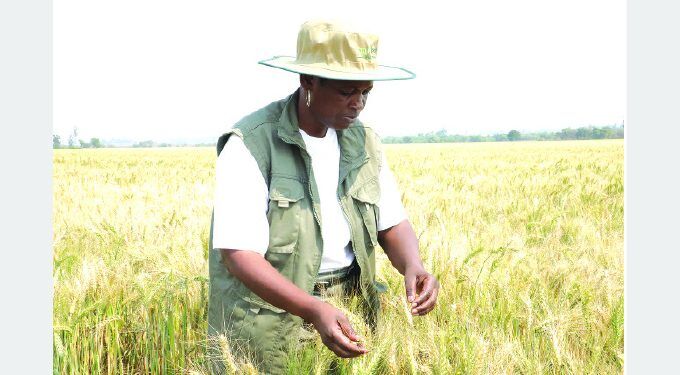 FORGET the traditional notion that women are best at providing unpaid labour – shouldering the bulk of hoeing and digging on the farm. Say ‘hello’ to the new breed of women that is not only toiling on the land but doing the day-to-day running of the affairs.

Such is the case with 50-year old Mrs Junior Makiwa Chisoko of Satchel Farm in Glendales, Mazowe District.

For Mrs Chisoko, there is no ceiling to limit her rising star, as she works with her six-people labour force on her 29, 9 hectares of land.

Driven by a strong passion, Mrs Chisoko is a full time farmer who spends much of her time at the farm to make sure her efforts bear fruits that leave her both food secure and economically sound.

“I am very passionate about farming. This is something I felt even as a child and so I allowed farming to take precedence over everything else in my life including my sense of independence as a woman,” she said this jokingly during a winter field day held at her farm recently.

Together with her husband, Mr George Chisoko, the couple started farming in 2002 producing maize and soya beans but with very little experience, which saw them getting minimum returns and little profits.

They then realised it was critical to seek advice from Agritex extension officers at the Mazowe district offices. This would mark the beginning of a long journey that saw them change from being ‘mere’ farmers to the successful commercial producers they are today.

Mrs Chisoko describes her husband as her pillar of strength in the thriving farming project.

“My husband is my pillar of strength as well as advisor. I owe these flourishing activities to the sound advice I get from him. I want to thank him for the support he is giving me,” she said.

The October 14 winter wheat field day she held at her Satchel Farm showcased her management acumen through their 28 hectares of the cereal from which they expect to harvest at least six tonnes per hectare. The field day was running under the theme: ‘Bounce back better.’

“We expect to start harvesting our crop mid-November. We are going to hire combine harvesters from AFC Leasing Company,” explained Mrs Chisoko.

Mrs Chisoko’s success on the field has not compromised her patriotism as she strongly believes that her participation in wheat farming is her way of contributing to the National Development Strategy 1 (NDS 1) through ensuring that the country is wheat self-sufficient and do away with imports that are bleeding the economy. But her journey is not always rosy, as she has to contend with a couple of challenges that can easily ruin an entire season’s value if not handled properly. Although she boasts crops that are in good condition, Mrs Chisoko has to be wary of rampant veld fires currently wreaking havoc across the country while rampaging quelea birds have not made her situation easier.

“Veld fires were the major problem for us wheat farmers. We have to construct fireguards to secure the fields. Our intention is to get maximum returns from this crop, hence the maximum effort we push to safeguard it from veld fires,” she added.

She also has to deal with the quelea birds threat. Quelea birds ravage almost 10 grammes of yield per day if left to roam freely. At Satchel Farm they use the spraying method to control the birds and this way they make sure their projected yields are not tampered with.

Mrs Chisoko is an avid believer in the potential of women as farmers and feels that they should have the nerve to go all out to seek services that make their job as farmers easier. Women farmers must also benefit from loans so they should approach financing institutions such as the AFC Leasing Company and borrow.

“Women must go and apply for loans to enable them to fully participate in agriculture and score maximum returns.

They must also have the courage to start projects that generate quick returns especially during off-season periods,” she further observed.

On her part, she is also running a green mealies project that she established at the end of July this year.

“We planted green mealies end of July on three hectares. We are expecting to start selling the maize during the first week of December. The maize is in good condition as you can see. We get water for irrigation from Nyamavanga Dam,” she said.

The only thing to frustrate her in her green mealies project for now has been a recent outbreak of fall armyworm, which she aptly managed to contain. The pest is infamous for its ability to ruin yields.

“The major setback we have encountered in our green mealies has been the fall armyworm. We, however, managed to overcome it by spraying three times using different pesticides to ensure the pest does not develop resistance towards one pesticide. We are expecting maximum returns after selling the maize because only few farmers produce green mealies during the dry season because of the high cost of irrigation pipes,” explained Mrs Chisoko.

“Our future plans are to have a centre pivot and get more land to broaden our production scale, as we are sitting on only 29, 9 hectares of arable land. We aim to expand the current hectarage and make sure our yields also grow.

“We have been highly productive to the extent that we managed to purchase farm equipment with income from farming. That is a sign that we can do wonders if given more land,” she added.

She is grateful to the Government for supporting them with inputs

“As A1 farmers, we want to applaud the Government for supporting us with inputs under command programme. We also want to commend AFC Leasing Company for the unwavering support they rendered us. We also do not want to forget other institutions that have been actively involved in making us highly productive,” Mrs Chisoko further commented.

For her, farming has always been a business that must feed into the Government’s thrust and vision of economically empowering citizens and the country in general.

Away from the hassle of the farm, Mrs Chisoko likes spending time with her family. But family commitments do not distract her from her daily bread – farming. She always manages to strike a balance between the two making sure neither of them suffers in the process.