by Wenceslaus Murape
in Livestock, News
0 0
0 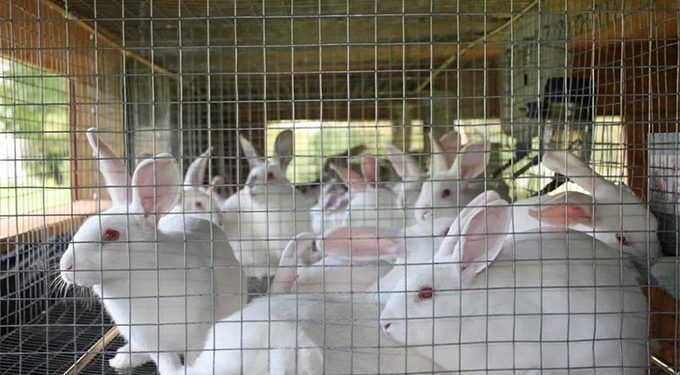 HATFIELD rabbit farmer Kudakwashe Chingono is eyeing to expand his colony of rabbits to 100 000 from the current 2 000, as he pushes to meet the growing demand for rabbit meat both locally and regionally with orders coming from as far afield as Botswana and South Africa.

Chingono started rabbit farming in 2015 as a part time business to supplement his income with only nine females and one male but has since experienced tremendous growth that has seen his colony growing to 2 000 breeders in cages.

“One of the things that attracted me to rabbit farming is that they are fast breeders and they can multiply fast,” he said.

poultry. One can enjoy his fair share of the market without fighting off stiff competition from bigger companies.

“We currently serve a big domestic market through giant retail outlets such as OK, Bon Marche and Shangri la whilst supplying other farmers with breeders around the country,” Chingono explained.

As Government intensifies calls to boost the country’s food and nutrition security through its blueprint, the Agriculture and Food Systems Transformation Strategy, Chingono is seeing an opportunity to make the most of his operations and get maximum value from his rabbit-farming business.

“Our intention is to staff value addition as well. We plan to start deboning the meat, producing mince and do canning for dog breeders,” he said, stressing the importance of value adding in the rabbit industry.

Rabbits generate various by-products such as fur, tails, paws, manure and the urine that is effective as a basal fertiliser, which makes them a strategic livestock unit to produce, further explained Chingono.

“It is also necessary for me to learn to tan the leather of the animals, as this will significantly increase my earnings. The leather is more profitable than the meat,” observed Chingono.

The rabbit farmer, Chingono, was able to make rabbit production a successful agri-business through integrating other players along the value chain. He supplies rabbit breeders, cages and rabbit medication to new farmers looking to venture in rabbit farming.

Added Chingono: “I am happy and satisfied with the numbers that I have now. I can produce 48 to 60 new rabbits per year but there is still need for growth.”

Like any other small-scale producer, his expansion plan faces industrial constraints such as sourcing of feeds while financial challenges have also played their part in the rolling out of the business.

To maximise production, he highlighted the need for sufficient infrastructural development especially for structures such as cages to meet market demand.

The rabbit industry is projected to grow by least 50 percent this year with meat uptake volumes estimated to reach 45 tonnes from the current 30 tonnes.

The Government through the Ministry of Lands, Agriculture, Fisheries, Water and Rural Development is set to mainstream commercial rabbit production as a key component of the livestock recovery and growth plan.