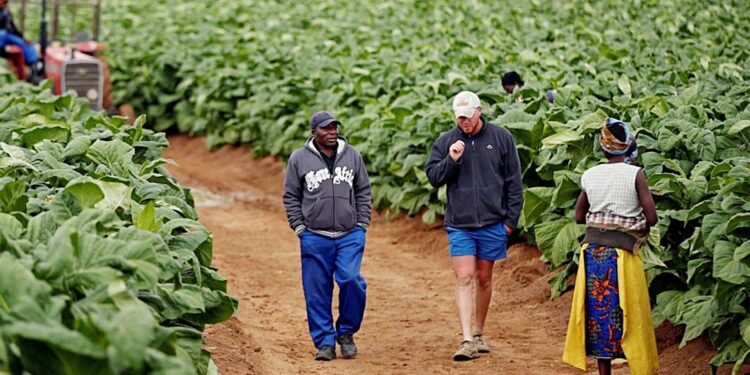 CONTRACT farming has fast become the bedrock of Zimbabwe’s tobacco sector, a Tobacco Industry and Marketing Board (TIMB) top official recently observed.
Farmers on the one hand, hail contractors for giving them access to capital and inputs, which is enabling them to equip their farms and timeously transplant their irrigated crop, as each season kicks off.
This comes as the Government recently approved the Tobacco Value Chain Transformation Plan to grow the sub-sector to a US$5 billion industry by 2025.
The drive behind the plan is to create opportunities aimed at changing outcomes for all stakeholders in the value chain.
It is envisioned that the plan would not only better the livelihoods of farmers and their families, but will also boost the economy, localise funding and significantly contribute towards the realisation of national Vision 2030.
In an interview in Harare recently, TIMB chief executive officer, Mr Meanwhile Gudu, said contractors added value, indicating that the Government was working on replicating the contract model across other crops.
“Contract farming is key to the success of the tobacco industry in Zimbabwe. Without contract farming there is no tobacco to talk about,” said Mr Gudu.
He said due mainly to self-funding, the country recorded its lowest output of 48 million kilogrammes in 2008.
“Contractors came on board, and we managed to recover to a record 262 million kilogrammes in 2019,” Mr Gudu said.
Because tobacco grown under contract adheres to sustainability issues, global trends are shifting towards contract farming. Nonetheless, the issue of funding has always been thorny, particularly where beneficiaries of the post-2000 Land Reform Programme are concerned.
Newly resettled farmers found themselves with large swathes of land – the crucial means of production that was envisaged to better their livelihoods. But without resources to take them off the ground in a meaningful way, they remained stark.
Banks closed their doors on them owing to lack of collateral, pointing out that their 99-year leases were not bankable. With the Government unable to punch above its weight, doing only what it could to support the resettled farmers, opportunities were to be sought elsewhere.
Seeing the yawning gap, resource rich contractors came in to fill it, and complement the Government’s efforts by providing financial and technical support to farmers as well as create a ready market for their crop.
Dr Howard Marowa (55), a farmer from Mashonaland West Province, said that contract farming was a game changer for him, as it came when he was financially hamstrung.
It has helped him in equipping his two farms – Farm 4 in Chitomborwizi (90 hectares), Makonde District, and the 450ha Lone Calf Plot 4 in Mutorashanga, which he acquired during the land reform programme in 2001, as well as a 250ha farm he is leasing under a partnership.
“Contract farming helped me in more than one way. I was probably one of the first farmers to get equipment under contract with Tian Ze,” Dr Marowa, a veterinary surgeon, said.
“Each year, the contractor would give us interest-free capital to buy equipment and inputs, which helped us to grow as farmers.
“I started with one centre pivot in 2009, and the following year, I was given money to buy another one. To date I have about 12 centre pivots (at Farm 4), which are helping me not only in tobacco farming, but also in wheat, soya beans and maize cultivation.”
When Dr Marowa joined contract farming in 2009, he was growing 40ha of tobacco. Due to the support he got, and continues to get from Tian Ze, each year he puts 400ha under wheat, 300ha under maize, with tobacco taking up 200ha.
Since his combined capacity is 270ha, with only 180ha of Lone Calf Plot 4 being arable, Dr Marowa leases about 630ha from other farmers, including the 250ha Banket farm.
With lateral pipes, which were difficult to use, now a thing of the past, he owns 25 centre pivots, 24 tractors and a combine harvester, among other farming equipment, spread across his farms, courtesy of contract farming.
Dr Marowa said contract farming was a good starting point, urging patience and discipline, since farming profits are not “so dramatic”.